What are bolts? What are the types of bolts?

It is called a temporary mechanical connection that is usually used with a nut and washer to connect two or more parts. The function of the screws is to create a connection between the two separate and separate pieces. Typically, the most common feature of screws is to connect the parts and keep them in place.

In English, the words Screw and bolt are used for screws. The main practical difference between these words is not their efficiency. Both of these words refer to screws. The only significant difference is that the word bolt is used when a nut is used next to the screw, but the word screw is used when a screw without a nut is used next to it. Self-tapping screws are also commonly referred to as automatic screws. There are many different types of screws and their applications are very diverse, and in terms of the type of raw materials used in their construction, dimensional standards and threads and coatings can be identified.

The general structure of a screw typically consists of two parts.

The part of the screw that is located at the top is called the flower or head. Various manual and automatic tools are commonly used to tighten and tighten the screws. The screw head is usually larger than its body to prevent it from completely collapsing into various parts. Of course, this rule is not always mandatory because there are screws that disappear completely in one piece.

The part that is tooth-shaped and spiral and causes it to be tightened by turning the screw is called a thread.

The nut is the female part of the screw, and the nut connects the parts together. The nut is wrapped around the screw so tightly that the parts are held in place.

The design of bolts and nuts varies according to their applications. For example, in places where there are vibrations or vibrations, small gear bolts are used. Beads, like screws, have two main parts. The part of the hole or the part through which the screw passes has a special thread like a screw. The outer part of it, which has different sides, which, like a screw, must be used to secure the wrench, is also called a wrench. In some cases, washers are used to better fasten the bolts.

What are the main uses of bolts and nuts?

The most common use of bolts and nuts in terms of tonnage is for structural and structural applications. In this regard, there are various standards that can be mentioned below. After industrial use, the highest consumption is in the automotive, heavy industry, oil, gas, and petrochemical industries. Automatic screws are also often used in the manufacture of home appliances, wood, cabinet and furniture industries. The use of screws is so varied that even in our body they may be used as implants.

What is the general classification of bolts and nuts?

The bolts have different shapes and sizes depending on the need and the where it use. Bolts are classified according to several important indicators.

■ Type and step of thread .

What is the material used for bolts & nuts?

The choice of grade and dimensional specifications of bolts and nuts depends on where they are used. Accordingly, the material used to make bolts and nuts can range from plain carbon steels to stainless steels, but in general most bolts are made of simple carbon steels. Using different steels in the construction of bolts and nuts, different amounts of tensile, compressive and impact strength and shear are obtained.

In general, as the grade of bolt and nut strength increases, the cost of manufacturing and quality control increases. Low carbon to medium carbon steels are most commonly used in bolts and nuts manufacturing. In places with high corrosion and wet environmental conditions, alloy steel bolts and nuts are used.

What is the method of identifying bolt and nut grade?

According to international standards, bolts and nuts are named based on numbers, letters and symbols on bolts and nuts. This identification is usually done on the bolt's head or on the nut's washer face. For example, the: According to the iso 898-1 standard, the screws are marked as follows: 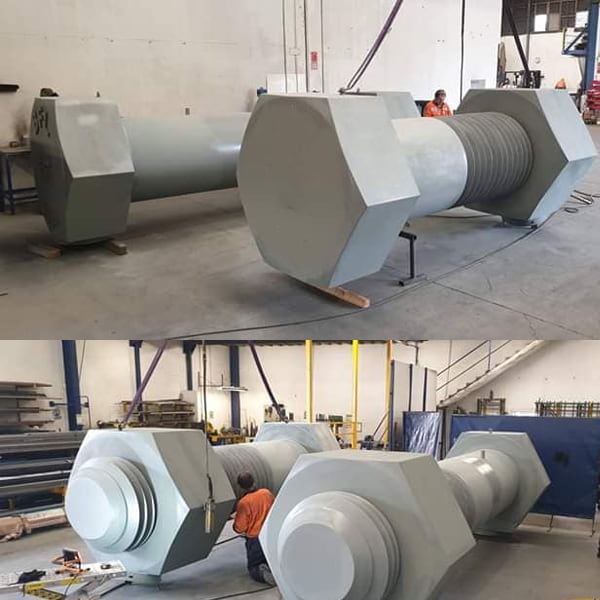 Hexagon and hex lobular socket head cap screws shall be marked with the manufacturer's identification mark and with the marking symbol of the property class specified in Table 19.

The marking is required for fasteners of all property classes and of nominal diameter d ≥5 mm.

for observation of each bolts and nuts marking requirements meet the relevant standards. For technical information, please contact the technical department of Nirutvan Company.

What are the types of bolts and nuts?

bolts thread is one of the most sensitive points in choosing bolts. Because threads meet international standards, there are generally two types of metric and non-metric (imperial) threads, as they are based on conventional units of measurement in different countries and bolt design systems.In terms of dimensions, size, and usability, screw threads and conventional threads also have two coarse threads and fine threads, each of which has other classifications. Bolt and nut threads are also classified into other categories such as screw threads, spiral, squre, helical thread, etc., and as mentioned, they can be used according to the application conditions and dimensional standards.

What are the different types of screws?

The bolts and nuts used in various industries that have hexagonal head are called hex bolts. There are other types of bolts depending on their application, including socket head cap screws, self-tapping head screws, mushroom head screws, square neck screws, screwdriver screws, and more.

Types of bolt and nut standards

The American Society for Testing and Materials has set ASTM standards for a variety of bolts and nuts with a variety of grades depending on their application. Among the most important types of bolt and washer standards, the following can be mentioned:

European standards also use the European Union (ISO) standards set to introduce the most important standards required for bolts and nuts, and can be said to be the most reputable institution of international standards for ISO and DIN. In our country, considering that the Iranian Organization for Standardization and Industrial Research (ISIRI) uses the EN and ISO standard set for developing national standards, these standards are of great importance and obtaining the national standard of Iran depends on full compliance of a company's products with standards.

The DIN standards are explained by the German Society of Engineers and provide a complete list of types of bolts and nuts in terms of shape, class, grade, size, and gear length and pitch. The use of DIN standard in bolts and nuts is very common not only in Iran but all over the world due to the high accuracy and processing of important details in the selection of bolts and nuts.

Each provided several separate standards for different applications of bolts and nuts. Interestingly, the standards related to bolts and nuts are constantly being revised and improved, and it can be said that fewer pieces of industrial parts have been as sensitive and accurate as the bolts.

Today, the use of bolt and nut structures in industry has increased dramatically, so that in the past these structures only included industrial sheds and petrochemical complexes and structures used in the oil and gas industry, but now the use of this structure Housing, office and commercial buildings, which are also being built in cities, have seen significant growth. One of the most important reasons for using bolt and nut structures in industrialized countries is the lack of welding required during the installation of the structure and in difficult situations, as well as the higher speed of installation at the installation site than welded structures. Also, the skeletons that are produced on the site of construction projects are limited due to the limited supply of sufficient electricity and the use of modern welding and cutting machines (with high penetration rate and standard), lack of industrial tools for welding thicker sections, experienced teams, Improper painting and rusting, etc., are not only poor in quality, but also quite cumbersome and have a time-consuming process that will undoubtedly lead to traffic jams and disturbing neighbors.

In addition to the above, the traditional method of constructing a structures in place in terms of connection and installation is expensive because of cranes rent times. Due to the earthquake-prone of our country and the unfortunate events that took place in the past years, especially in Bam town, a new approach and approach to industrial production and standardization of building structure has emerged because this type of buildings with special design and industrial and modern design, can be resisted. They have a consideration compared to traditional structrues. Due to the scope of design in beams and prefabricated structures, space and load calculations are also performed with high freedom of action.

Related Posts Bolts- Information on the different categories of bolts